Poland: Deaf and blind, they manage to drive a car 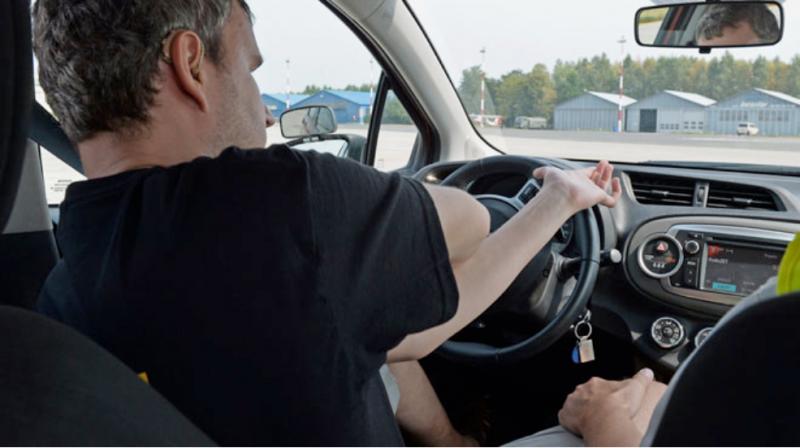 All 19 drivers who took part in this unusual race on the tarmac of the Lodz airport in central Poland earlier this month are hearing and visually impaired.
But like Helen Keller — the American author, activist and lecturer who was the first deaf and blind person to graduate from college — they are pushing the envelope of their disabilities.

“Out of 19 participants, 12 had never driven a car before, while seven used to drive before they became disabled,” said Mateusz Kotnowski, from Poland’s Deaf and Blind Aid Society (TPG).
“Some are completely deaf and blind. Those who can still see or hear a little wear masks and helmets to ensure an equal playing field for all,” he told AFP.
Each participant had to complete two timed laps of the circuit while under the watchful eye of a co-driver. First, though, they had two days of training to get a feel for the steering wheel.
Three driving schools volunteered a parking lot, five cars and a handful of instructors — who first had to work out a language based on touch to communicate with the drivers.
Zbigniew Palgan, the owner of a driving school, gave out a clear set of instructions to his deafblind driver, whose face showed a determined concentration.
“When I touch the left side of your knee, turn left. When I touch the right side, turn right,” Palgan said while demonstrating the motions.
“When I touch the top of your knee, straighten the steering wheel, and when I press down, accelerate. When I pull on your knee, brake.”
For safety’s sake, the instructor could stop the car at any point. But with every kilometre, the drivers became more and more confident.
Kamila Dobrzynska, a 30-year-old who is blind in one eye and partially deaf, made it up to 50 kilometres (30 miles) per hour by the end of the straight.
“It’s a weird feeling. There’s fear,” she said.
“You don’t know where you are, so your ears and eyes are those of the instructor. You need to have total confidence in him,” she told AFP.
Sylwek Slipek, who is deafblind, drove for the first time in his life — and with wife Kasia, born blind, along for the ride to cheer him on.

Riding in the back seat, she gave her husband a pat on the shoulder and said “Good luck” before a woman waved the checkered racing flag and Sylwek set off on his first lap.
The 30-something couple said that the event was a way for them to forget their everyday problems.
Sylwek once worked as a supermarket clerk but has been on the job hunt for three years to no avail. The unemployment rate for disabled Poles is 16 percent.
By taking part in the event, the couple hoped to help break stereotypes of those with disabilities.
“Perhaps others will realise that if deafblind individuals are able to drive a car, then they can just as well have a job and work,” said Kasia Slipek.
“Perhaps they’ll see us as nice people with good values — and not some good-for-nothings,” she told AFP.
Sylwek completed his laps flawlessly, earning sixth place overall.
But the trophy went to Kamila, who not only broke stereotypes of disabled people, but of women drivers as well.